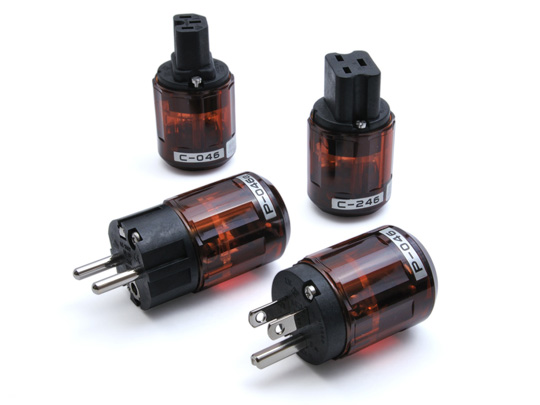 Materials
Contacts
The basic material is deoxidized phosphor bronze (1.4mm thick) for strength and secure contact. When connected, they can take over 7kg load. Surface is thoroughly polished twice.

Plating
The manufacturing process is started from foundation coating. The material which was punched out as a part is polished by hand piece by piece after machined barrel-polishing.

The plating of the P-046/C-046 is a combination of 24k gold and palladium which were selected as a result of repeated listening tests. The inner gold layer is 1.5 microns thick and the outer palladium layer is 0.3 microns thick.

Body
Body
30% glass filled PBT has excellent machine-ability and provides superior electrical isolation. The highly rigid body of the P-046/C-046 effectively attenuates high-speed vibrations. All screws, which were originally designed for P/C series, are made of highly rigid stainless steel which is non-magnetic substance. Moreover, the cable cannot be separated from the plug by a force less than 30kg, a significant safety feature.

Stainless screws
The screws of P/C series are all made of highly rigid stainless so its screw head doesn't collapse even if you give them too much strength. In addition, because it is non-magnetic material, it helps to achieve hign S/N ratio without being magnetized at its conection part.

Outer cover
The outer cover of P/C series is made of PC(PolyCarbonate) for its rigidity and hardness. It helps to attenuate tiny vibrations in quick response and reduce distortions by its superior mechanical strength.